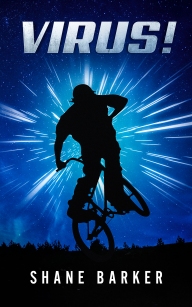 My book “Virus!” came out about a month ago, so I’m a little late getting this posted. But what a kick! If I ever wrote a book that was “pure adrenaline,” this is it.

When I began writing, I remember thinking, “I’ve got to start this story at ninety miles and hour . . . and keep getting faster!” You’ll have to decide for yourself how well I did, but I know there were nights I couldn’t get to sleep because I was so hyped up over what I was writing. (One young reader told me that he’d read the whole thing in about two days, and that when he was finished he “chuffing for breath,” as if he’d been the one doing all the running.)

I do have to make special mention of a few key characters. “Brady” was inspired by a young man I know, and so were “Sid” and “Ethan.” (I’ve actually been trying to work Ethan into a book for quite a while, and I’m glad he finally made an appearance.)

And Hunter . . . oh, man. If you ever met the young woman who inspired Hunter, you’d think I actually toned her down quite a bit. I used to joke that when she became older, that no young man would ever propose marriage to her. That instead, she’d simply inform some lucky guy one day that they were going to be married, and that was that.

I’m not sure if things actually worked out that way, but I have my suspicions . . .

I hope this book is as fun to read as it was to write!

View all posts by shanebarkerbooks