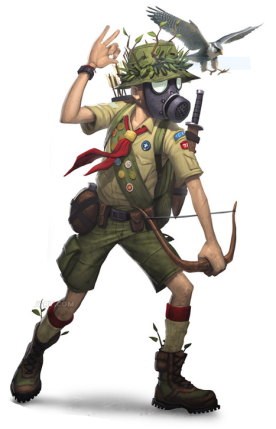 I was recently invited to speak to the 11-year-old Boy Scouts from Altamont, Utah, at their yearly overnighter at spooky Moon Lake in the High Uintah Mountains. Last year I gave a funny talk about scuba diving, and even though this was an entirely new batch of kids, I decided that this year I’d tell them some funny flying stories.

Once I got there, though, and started meeting the boys, I realized I’d prepared the wrong talk. I had to change things on the fly, and started out by telling them about my trip to the doctor that morning, pretty much ad libbing the whole thing. This is how it went . . .

“Wow, I’m jazzed to be here again. I have to apologize because I’ve been limping around all afternoon, and I know some of you are curious about what’s wrong. You see, something really weird happened to me this morning, and I normally wouldn’t talk about it, but I figure we’re all friends and you won’t judge me too harshly.

“I had to go to the doctor, and he’s a nice guy but he told me that he needed to give me a couple of shots. He stepped out and talked with his nurse for a minute, and a few minutes later she came in carrying two syringes. And they were HUGE! When I first saw them I thought they were bazookas. They were so big she wasn’t carrying one in each hand, but she had her arms curled in front of her and was carrying them like chunks of firewood.

“I looked at the doctor and said, ‘Dude . . . you gonna hunt deer with those things?’ And without looking up from his papers he said, ‘No, these are for you.’ I just shook my head and said, ‘I’m not on fire, man, if you’re thinking of using them to hose me down!’

“He just gave me a sour quit’cher-whining look, so I just sighed and started rolling up the sleeve of my shirt.

“Now, have you guys ever seen How the Grinch Stole Christmas? And you remember how the Grinch–when he decides how he’s going to ruin Christmas for all the Whos in Whoville–he gets this evil grin that just curls around his face? Well, the doctor started grinning at me and he got the same evil grin and he said, ‘Dude . . . these aren’t going in your arm . . .”

“Oh, man! I couldn’t believe it! And I’ll skip what happened next (except for telling you the nurse said all the neighborhood dogs started howling when I screamed), but then I sat down–carefully–while the doctor wrote me a prescription. So then I was finished, but when I stood up to leave, I tripped and fell flat on my face. One of the shots had put my leg to sleep–completely to sleep!–just like the shots do that you get at the dentist. You know how your mouth goes funny and you can’t feel anything and you talk funny for a couple of hours? Well, that’s what happened to my leg. And even though I got the shot at, like ten this morning, my leg’s still asleep. And I’ve been really worried about it because I know later we’re all going on a night hike, and I know there are a lot of bears around here, and if one starts chasing us, I’ve only got one good leg to run on and you know the bear’s gonna come after me, right? Yeah, everyone’ll start running and I’ll be hobbling along and he’s gonna be thinking, ‘Get the slow guy! Get the slow guy!’ ”

Well, by now the kids were all howling, and I was having a great time too. I never gave a single word from the talk I’d written, but was sooooo glad I decided to go off script. I told them a few of my favorite funny bear stories, like the one where a fisherman’s standing in the middle of a river . . . well, I’ll save that for another time.

The point is that it’s times and experiences like this that makes being a writer so much fun. (I’m almost willing to go back to Doctor Deadleg just to get some new material!)